skip to main | skip to sidebar

The workshop is good as the main objectives of the programme have been achieved. Tanzanian journalists use the internet in their daily works. The scope of internet use differs from one journalist to another according to the desired work. Journalism profession change from time to time depending on the use of technology. Technological advancement now allows to the emergence of variety of journalistic breeds including citizen journalism.
Citizen journalism incorporate the wide use of information technology where as the internet serves as the play ground and medium of disseminating news. Bloggers communicate through the net where now other medium of news such as magazines, newspapers are rarely used.
The workshop imparted us with new skills on how to use the internet for effective news exchange where one can write texts, adding pictures and other images to share with fellows in the net through blogs.
I believe that there are so many important aspects in the internet that we are not well knowledgeable to them; exposures such as the internet workshop could make journalists more conversant in the use of that breed of citizen journalism.
I am very grateful to convey my thanks to those who facilitated that workshop especially the Embassy of Finland, MISA Tanzania Chapter, workshop Moderators Mr. Peik Johansson, Mr. Maggid Mjengwa and others. It is my hope that we are going to use that knowledge in our works and daily life regarding that journalists are communicators.
Posted by Mtaleban at 6:37 AM No comments:

Posted by Mtaleban at 5:32 AM No comments:

Posted by Mtaleban at 2:36 AM No comments:

THE CONSQUNCES OF CLIMATIC CHANGE ON MOUNT KILIMANJARO. 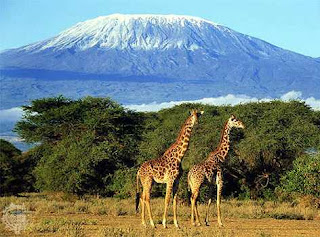 Mount Kilimanjaro derives its name from the Swahili words Kilima Njaro meaning shining mountain, a reference to its legendary ice cap. It is the retreat of this ice cap, arguably linked to rising temperatures, that has made the Kilimanjaro a prominent symbol of the impacts of global climate change.
Beyond the symbolism of the ice cap Kilimanjaro is also a hot spot of biodiversity with nearly 3000 plant species and providing a range of critical ecosystem services to over one million local inhabitants who depend on it for their livelihoods, as well as to the broader region that depends on water resources that originate at the Kilimanjaro. The Kilimanjaro ecosystem is also subject to wide ranging impacts that may be more directly attributable to changes in temperature and precipitation patterns, and which may have far greater significance than the melting of the ice cap itself.
Mount Kilimanjaro with the height of 5,895 meters is the highest mountain in Africa. Located in Kilimanjaro Region Mount Kilimanjaro dominates Tanzania's northern border with Kenya. Mount Kilimanjaro and its surrounding areas provide beautiful and attractive scenario where as local and foreign tourist visit the area and climb the mountain every year.
Through tourism Kilimanjaro region collects revenue that invested in various social and development projects such as social services like schools, hospitals, water and sanitation and others.
Global warming, deforestation, fires, unsustainable agricultural practices such as farming on slop areas without using contours, shifting cultivation and others contribute to climatic change on Mount Kilimanjaro. Wild fires, deforestation, global warming and other factors contribute to glacier depletion on Mont Kilimanjaro.
Due to a decline in precipitation coupled with a local warming trend that has been recorded in the second half of the twentieth century Kilimanjaro’s ice cap is now projected to vanish entirely by as early as 2020.
Climatic change has tremendous effects on Mount Kilimanjaro such as water shortage, fall in revenue on tourism and loss in ecosystem.
This has also affects the national economy.
The melting of Kilimanjaro’s ice cap receives much attention. Articles in local, regional and international newspapers described the results of ice core drilling by American scientists during the years 2000-2001. A study on climatic changes in the context of the receding ice level on Mt. Kilimanjaro was chosen to be a topic among the proposed research priorities for the next years of TANAPA - Tanzanian National Parks.
Bulk of development processes is departing from the mountain, although most of the population still remains there. Manufacturing in the region has collapsed following the closure of most leading factories. Even in the tourism market neighboring Arusha out-competes Moshi in the Kilimanjaro region. Agriculture, the livelihood for most residents, accounts for over 85 percent of the total regional income with coffee being the main cash crop. Many farmers think about replacing their coffee trees with other crops such as passion fruits. In the 1970s 35,000 tonnes of coffee were harvested annually in the region whereas today only 12,000 to 15,000 tonnes are produced.
Posted by Mtaleban at 4:52 AM No comments:

At least seven people have been killed after a car bomb targeted a prison bus in Pakistan, police said.
Six policemen and a civilian died in the morning blast near Bannu town in North West Frontier Province (NWFP).
Police told the BBC Urdu service that the device was in a vehicle parked on a bridge and was detonated by remote control as the prison van approached.
Bannu is close to the border with Afghanistan, where Islamist militants have been attacking security forces.
Police said no prisoners were on the bus at the time of the blast, at about 0900 (0300 GMT) in the garrison town, 250km (155 miles) south-west of the Pakistani capital Islamabad.
A local police superintendent told the BBC: "Six policemen and a civilian have been killed. The prison bus was on its way to the jail to pick up prisoners for their court hearings.
Posted by Mtaleban at 11:57 PM No comments:

Today we have learnt journalistic research on the Internet.
Journalists use the Internet to find variety of information for news writing purposes and others including expanding their general knowledge.
In searching for facts on the Internet one needs to be specific to what facts and which website is he/she going to use. This will help he/him to get direct to the material required such as healthy, politics, sports and others. Specifications of names such as presidents, capital cities, company names and others makes easier for searching engines to trace the requested information.
We have also learnt how to link blogs with other websites where bloggers can link texts from various sites to their blogs. This helps journalists extract information and use it for their work. We have also learnt how to link one blog to another so that bloggers can communicate each other.
Posted by Mtaleban at 6:56 AM No comments:

Yesterday we covered on the use of internet in everyday journalism especially researching news from various websites. We have also learnt how to create website blogs where one can post texts, pictures as well as other materials than can be stored and disseminated on the net for different purposes.

All websites impressed me since they provide variety information to suit the desired audience. However I was not happy with the blogs contained obscenity and pornographic materials.

I observed various things when I was surfing on those blogs and websites.Some websites such as BBC SWAHILI do not up to date their texts including news.Some statistics remained unchanged on the website. This can lead to distortion to people who use information from those sites. Secondly some blogs contained obscenity and pornographic materials something is immoral and dangerous to youth. Theutamu.blogspot.com is one among them.

Problems I faced yesterday during the session include the slowness of the server of the network we are working on. This however made us spent a lot of time surfing on websites. The procedures of creating a new blog to me was quite difficult especially registering the password and others particulars. Sometimes it forced me to repeat the procedure for several times. This was however bored me.
Posted by Mtaleban at 12:12 AM No comments: